Work started today on preparatory work for the fitting of the footbridge roof. The Williton Station Maintenance started priming the 7”x2” fascia boards which the guttering and dagger boards will be attached to. This is the first job to be undertaken in the new maintenance hut which now has power and lighting installed. On Monday 16 April the scaffolding will be erected and be completed on 17 April when work on site will start. The main contract is being undertaken by John Farley, who as well owning a building company in West Wales, is also a steam engine driver on the West Somerset Railway. The electric work is being undertaken by Stuart Freeman a Williton based electrician, steelwork is in the hands of West Somerset Restorations and RAMs are producing and painting the dagger boards together with some miscellaneous work. The contract is programmed for completion in 4/5 weeks. 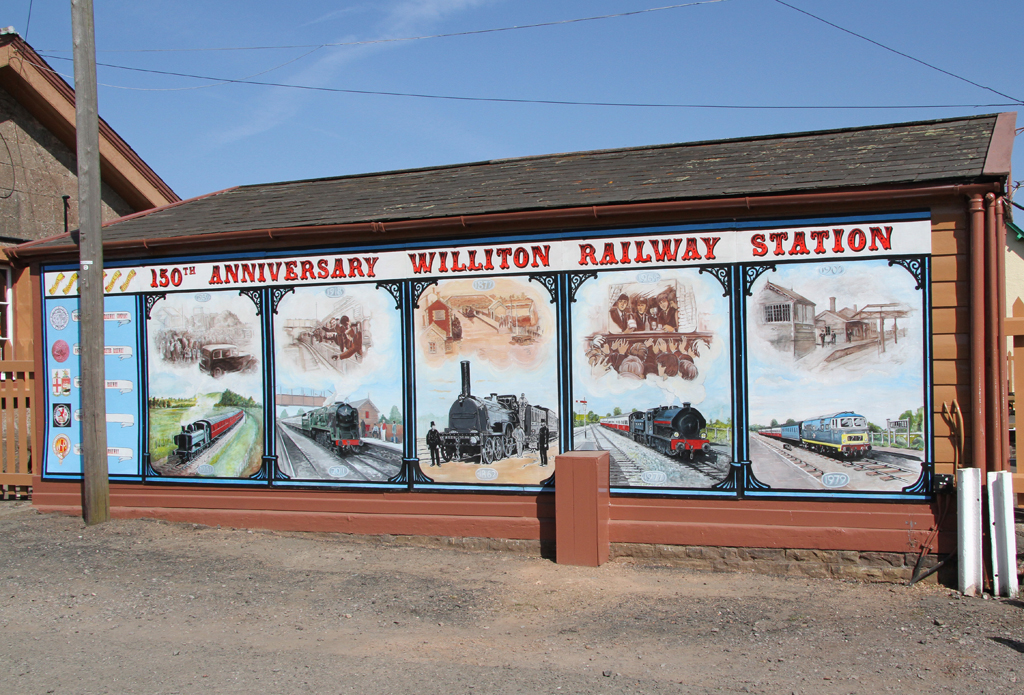 During meetings to discuss the Watchet 150 celebrations Martin Hope, Williton’s Station Master, came up with a proposal to paint a mural on the wall of the station shop facing out onto the car park.  Whilst other stations proposed grand celebrations on just one day he considered that the mural could be in place for at least twelve months and give enjoyment to passengers joining the train at Williton during the whole of the 2012 summer/autumn season.

He approached Tad Mandziej a local artist and wood carver who agreed to assist and he started working on Martin’s rough design for the mural. Many meetings, e-mails and hours taken to select the appropriate photographs  resulted in the design being firmed up by Tad.  It was now time for Brenda, Tad’s wife to get involved , a talented artist she worked for many hours producing the mural assisted by Tad and several local artists.

The result can be seen here – a fantastic mural which definitely has the wow factor.

The mural was unveiled at a ceremony held during the morning of 31 March.

Our thanks go to Tad and Brenda and the other artists involved.

To enable work to start on lengthening the Williton Loop the Ex-SR Wagon presently used as a Mess Room and workshop has to be moved. On Tuesday 13 March a new Maintenence Hut was delivered and erected on the base of the former water tower.  Work is now proceeding on insulating the hut and preparing the building for use.

27/02/12
Spring Steam Gala update
We have been informed today that due to operational reasons “Driver for a fiver” rides at Williton will not take place during the Spring Steam Gala.
Also to clarify the Swindon Shed will only be open to the public on Saturday and Sunday on both weekends.
22/02/12
Autumn Steam Gala
Another question the station staff are being asked is “When is the work on the loop going to start?” The answer to this is  – work has started and has been undertaken  since early last Autumn.  Before the loop can be put in the bridge over the culvert has to be reinstated to accommodate double track and to enable this the black ex-SR wagon used by the station’s Maintenace Team has to be moved.  A new Maintenance Hut is to be built on the base of the  former water tower. When this area was cleared the cast iron pipes which were used to feed the tower were uncovered (pictures in Gallery 15 2011).  Permission has been granted to build a temporary wooden structure over the top of the pipework in case it is needed in the future if the water tower was to be reinstated.

2012 – Base of the New Williton Station Maintenance Shed completed. Seen on 23 February. This work is licenced under a Creative Commons Licence. ©Martin Hope

The base of the shed is now complete and the shed will be delivered and erected during March. Once the shed is completed  and all the Manitenance Team’s work benches and tools etc. have been relocated to their new home the wagon can be lifted out.  This operation could take place before the last non running day in May.  If this is not possible the wagon will be moved in November.  Once the wagon is moved the site will be cleared and levelled to allow work to commence on the construction of the new bridge over the culvert.  This will then be followed by the installation of the new point further up the line.