“The Partnership Development Group (PDG) met on Wednesday 23rd September to consider proposals from the PLC towards achieving ‘One Railway’ via a fundamental re-organisation of the PLC to create a parent charity, with the PLC operating as a subsidiary company. The meeting was also attended by John Bailey, architect of the recent report recommending these changes.

The whole PDG was unanimous in supporting the roadmap and principles of the PLC initiative. It endorsed the terms of reference for the project and has also agreed to act as a reference group for ongoing consultation and assist with project development.

The Group recommended that the project should get underway as quickly as possible since there appears to be a consensus across the majority of people on the railway that this is right way forward. Indeed, there was an element of ‘just get on with it’ along with a recommendation to try and find a respected and independent chairman to lead the initial formation of a new parent charity and develop relevant articles of association

Steve Williams, PDG Chairman commented: ‘This is potentially the biggest change to the WSR railway structure in over 40 years and it was heartening to see a cross-party consensus across all representatives on the PDG. It also re-enforced the message that in order to achieve the required agreement on the proposed changes, it is important to work across all groups in a process of consensual evolution’.

Mike Thompson PLC Project Lead confirmed that the next steps are to send a letter to all shareholders of the PLC outlining the broad proposals to solicit an initial indicative response. If this is broadly favourable, the next phase will be to develop appropriate timescales and milestones toward achieving the desired re-organisation, ready to present for approval by the relevant member groups, no later than their 2021 AG

Partnership Development Group (PDG) has held its first meeting since 2018. PDG is an advisory and stakeholder body drawing together participants from all the major groups on the WSR together with County and District Council representation. Its role is to provide a forum for members of the WSR family to discuss railway wide issues and to provide advice and support for projects and initiatives.

PDG will be adding a WSR staff representative to its membership in time for the next meeting.

At the first meeting on 26 June, Steve Williams was elected Chairman and Mike Sherwood Vice Chairman. In order to keep WSR staff and supporters up-to-date with developments, PDG will be publishing its minutes on the various websites and social media platforms normally used for WSR matters.

Mel Hillman has kindly agreed to return to his role as PDG Secretary.

PDG will meet quarterly unless a more urgent discussion is required and the next meeting will be in September 2020.

Thanks to two hard-working volunteers on our station, we are able normally to present flower and vegetable plants for sale on platform 1 to raise funds towards all the necessary station repairs and maintenance. 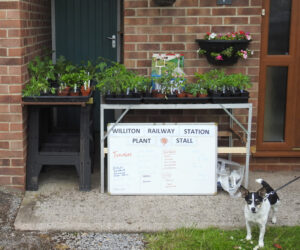 However, thanks to the effects of Covid-19 we are unable to open the station – but the plants were already growing! So we have them displayed on tables in the drive at 7 Dovetons Drive, Williton. They are available on a self-service basis with a donation box for your money. Sorry, no change given!

Please bring your own bags – and adhere to the two meter distancing measures.

For many years Williton Station has had an old dustcart (estimated as 1932-built) on display at the Minehead end of Platform 2. However, the years of west-country weather took their toll so in the end the rust holes were nearly as great in area as the remaining metal.
Ted Cockrell one day took pity on its sorry state and volunteered to create a replica so that once again the ancient design could take its place on the platform.

Ted delivered his work to the station in primer undercoat and Williton Station volunteer John Byfield finished the paintwork in our GWR light stone with black wheels. The wheels and other fittings are the originals, not having suffered so badly at the ravages of time!

Williton Station Master, John Parsons, checks out the station delivery bike before lending it, along with sack trucks and other station equipment, to Taunton’s Brewhouse Theatre for their forthcoming production of The Railway Children. 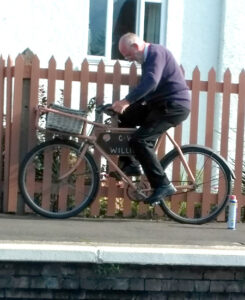 See also his pennant fame shown in our 2019 photo gallery.

John Byfield has been busy as ever, this time repairing and renewing the road sign on the A39, which you see by the right-hand turn to the station when driving from West Quontoxshead, dissuading drivers from taking the Highbridge lane. The sign was blown down and badly damaged in the spring storms.

Our photo, taken by Richard Salt, shows the finished sign in the workshop, ready to be re-mounted by the roadside.

Station volunteers Phil and Avril Chapman have designed and built this splendid plant sales stand to accommodate their plants for sale in support of Williton Station funds.

John Byfield smartens the Williton Station Workshop under a full possession of the line.

John has also refurbished a station sign to mount below the window which will give alert passengers advance warning of the train’s arrival at Williton – as can be seen in Richard Salt’s photo in the 2019 gallery.

Chris Hooper has been

busy next to the Signal Box, refurbishing and strengthening our picnic tables ready for the new running season.