For many years Williton Station has had an old dustcart (estimated as 1932-built) on display at the Minehead end of Platform 2. However, the years of west-country weather took their toll so in the end the rust holes were nearly as great in area as the remaining metal.
Ted Cockrell one day took pity on its sorry state and volunteered to create a replica so that once again the ancient design could take its place on the platform. 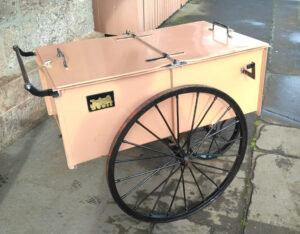 Ted delivered his work to the station in primer undercoat and Williton Station volunteer John Byfield finished the paintwork in our GWR light stone with black wheels. The wheels and other fittings are the originals, not having suffered so badly at the ravages of time!